Over a glass of Knob Creek, and after an impromptu cleanup of an overflowing toilet in the kids’ bathroom…
All this snow – and a Facebook post by a friend who lives in New York City – had me thinking about snowfalls past.
While I was a student at NYU, I loved the days it snowed and blanketed the city in pristine white. There was this one magical snow that I have never forgotten. It was the end of 1990- the beginning of 1991 – I was home on break but returned to the city one weekend to spend time with this guy was I was dating. We decided to go to the movies – we saw Awakenings in an intimately small midtown theatre and I was blown away by Robert DeNiro’s performance. I was feeling hormonal and particularly emotional, and tried so hard not to cry and embarrass myself.
It had started snowing during the movie so that the scene outside the theatre was positively beautiful. The side street was white and unadulterated by tire marks, and there was the occasional cab skidding by on 3rdAvenue. Otherwise, just the snow falling silently all around us, ghostly steam rising out of the manhole covers, and people leisurely walking –so black and white, like a scene out of a silent film. I could hear the sound of my own heart beating. He took me by the hand and together we walked the distance back to our dorm. I don’t remember what we talked about, or even what I felt – other than overcome by the magic of a silent, white New York on a snowy night, telling myself I never wanted to leave. If you’ve lived there, you know those moments don’t last. The next morning would be brown and potholes full of icy, dirty water would have to be navigated, along with slippery sidewalks and cold, gusty winds.
I don’t often remember whole events in my life, but certain scenes just stand out. Kind of like old photographs in an old dusty album. They are memories, but only tell a tiny part of the story.
Another snippet – a frigid, snowy night on 3rd Avenue again. My roommate and I were distracted from our studies by the sounds of our neighbors in the suite next door, making a ruckus from their window catty-corner from ours. They had started an impromptu baseball game with a stranger in an apartment across the street, baseballs crafted from snow collected from the rooftop above the 12th floor. Snow they carried down the elevator. Our friend was pitching the snowballs across 12th street and the stranger was hanging out his 4th floor window hitting them with a frying pan.
Most magical snowfall ever? The night Todd and I stole a kiss under the moonlight while the snow fell silently all around us, just a few weeks before we went public, the second time. 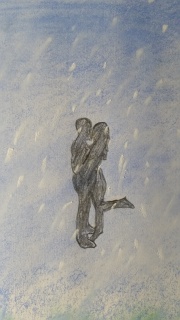 What’s your most magical snowfall? Tell me, I wanna know.

Join 299 other subscribers
All written content, unless otherwise indicated, is Copyright TaraKA and The Tara Chronicles, 2023. Unauthorized use and/or duplication of this material without express and written permission from this site's author is strictly prohibited. Excerpts and links may be used, provided that full and clear credit is given to The Tara Chronicles with appropriate and specific direction to the original content. The site identity digital drawing is copyright TMA, 2018, and is prohibited from duplication without legally obtained consent from the artist. I do not own the copyright to other images posted unless specifically stated.
%d bloggers like this: