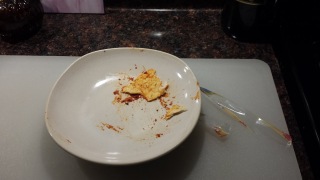 After last week’s rant over the condition of things in my house, where I all but shouted at Todd that I will NOT compromise my home to the conditions of others, I decided to lay down the law explain to the younger set the importance of thoughtfulness and cleaning up after oneself.  Not that we haven’t had this conversation before. This is one of those instances where if I had-a-dime-for-every-, I’d be lying on a yacht in the Caribbean drinking margaritas served on a silver tray by Emile Francois Philippe – our handsome young French butler who also provides deep tissue massages. Or, at the very least, Todd would allow me to hire a robust old German woman to manage the household while I sequestered myself in my office writing my masterpiece.
Unfortunately, for the time being I have been remanded to continued sock and shoe roundup, endless loads of laundry, and a perpetually smelly litter box. I hereby add to this list various miscellaneous items strewn about the common living areas, left by my offspring in the very spot they last used them, and some Special K flakes Owen spilled on the floor.
This affliction I have also noticed in my wonderful and adoring, though often absent-minded, husband in the form of leaving the [insert name of any tool here] where he was last working with it, or by way of standing-open cabinet doors and dresser drawers, and – just this very morning – leaving the slider to the deck open while he assisted me with an overturned table and umbrella. There. He asked me after the rant post if I had any complaints about him (I do NOT), so I got the feeling he was feeling left out. So there it is.
Anyhoo, yesterday Nephew helped me unload the grocery bags and put food away, noting that oh! there’s tuna? already in the cupboard, to which I (hopefully) gently responded, yes – I think I’ve told you this several times. And he … laughed. He thinks it’s funny when I call him out on stuff and, now that he’s discovered where to find my blog after I warned him not to, he will no doubt be alerted that what he left for me after he ate dinner last night – I am leaving for him. Todd always told me forewarned is forearmed. I guess the value of this is surely in who is being forewarned, but in any case my dear Nephew, I’ve left something for you. See you at dinner. J

All written content, unless otherwise indicated, is Copyright TaraKA and The Tara Chronicles, 2019. Unauthorized use and/or duplication of this material without express and written permission from this site's author is strictly prohibited. Excerpts and links may be used, provided that full and clear credit is given to The Tara Chronicles with appropriate and specific direction to the original content. The site identity digital drawing is copyright TMA, 2018, and is prohibited from duplication without legally obtained consent from the artist. I do not own the copyright to other images posted unless specifically stated.
%d bloggers like this: