Bowling alley #2 was only twenty minutes from our hotel and we didn’t have to leave as early as the day before. I heard Todd in the shower a little after 7 and I snuggled down in the sheets, still wrapped up in the warmth of sleep. At 7:30 he burst out of the bathroom with an urgency reserved only for oversleeping and told me Dick just texted him. Apparently, all four of us were under the impression that the tournament started at 9 like yesterday – and Jane just re-read the paper and it said 8:30. Under the best circumstances, we should arrive 30 minutes early to register and blah, blah, blah (whatever the bowlers do).

Let me just tell you how amazing I am. I leapt out of bed like the room was on fire and jumped in the shower. Twenty minutes later I was showered, dressed, made-up, hair dried….and packed up to leave. Todd kept telling me to slow down and relax, but I have this nervous energy that gets going like a freight train and there’s no stopping it. We collected an armful of breakfast from the hotel lobby, and that same young man appeared beside me at just the right time holding an open bag. I poured two cups of coffee in to-go cups and off we went.

Bowling alley #2 was in a town called New Versailles, a place you’d need an acid trip to experience anything close to the extravagance its name implies. The 20-minute drive took us through what looked like a town even the devil forgot, full of decrepit old buildings and homes with weeds climbing over fences and creeping up cracked sidewalks and broken windows. There was nothing fearful about it, only a sense of empty sadness and hopelessness. Did anybody actually live here?

And of course this is where the bowling alley would be. Well, not quite. The abandoned, graffiti-ed, and boarded up buildings gave way to … a pawn shop. I TOLD you so. The bowling alley was at the top of the hill from this, and just beyond was the light of McDonalds and the promise of real businesses with real people in them. I begged Todd to go toward the light, but he turned off in a crumbled parking lot filled incongruously with shiny, newer model cars. 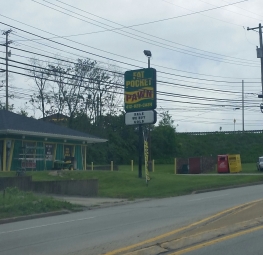 I TOLD you so.

This bowling alley was a stark contrast from yesterday’s and, knowing what to expect in any case, I was hardly surprised. The lanes our team started on had a breakdown just as they got started, but officials got it fixed. The water fountain was broken, one toilet in the ladies room was out of order, another stall was out of toilet paper (at 8:30 in the morning!), and there was no decaf. The bathrooms smelled like old people’s poop, and the scent infiltrating the entire bowling alley (I kid you not) was a very unwelcome assault on the nostrils so soon after waking. The snack bar was between the table where I was sitting and the restrooms, and I wondered what would make someone want to order anything with the noxious fumes of a sewer so close by. To add insult to injury? The sign on the front doors forbidding outside food and drink. Not many were deterred, especially me with my big Holiday Inn Express bag of goodies. I don’t know if the smell ever abated. I imagine I became immune to it, much like farmers do to manure.

It didn’t rain on day 2 – the sun was shining, although it was 39 degrees. We stopped for gas in an adjacent town my dad told me was a nice place to have breakfast or lunch, though I have serious doubts he wasn’t pulling my leg. The gas stations out there are called Get-Go. I bravely ordered a turkey sub (because we’re not in Philly anymore and you can’t get a hoagie in Pittsburgh*) and gave no thought to ordering a fourteen-inch. Todd and I shared HALF of it. But it was delicious. Three points for Get-Go. Channeling my youth, I chased it with a Dr. Pepper and spent the next two hours belching onions and hot peppers while Todd and I sang our hearts out to old 80s tunes and one-hit wonders. (Sirius rocks.)

We were pumped about the sunshine and clear road conditions on the drive home, that is, until a warning came up on the GPS that the road was closed ahead. A last minute choice kept us on the turnpike, and we paid for it when traffic came to a complete stop for thirty minutes. There’d been an accident in one of the tunnels. We saw some wicked tire marks running like a clothes-line across the two lanes when we finally passed through.

We sat at mile marker 114 and talked to Dick and Jane, who were 11 miles ahead of us, and Ted – who was about 2 miles behind us. I joked about jogging back to him and then back to Todd – at least I’d get my run in that day. It started snowing – little snowflakes blowing on the sunny wind – snow, in mid-May! But at least it wasn’t raining.

When the road reopened we were cruising again at a cool 80 m.p.h., and more than made up for the time lost. We picked up the kids a full hour and a half earlier than I’d predicted, and they were surprisingly upbeat and grateful to be going home. My favorite thing.

All written content, unless otherwise indicated, is Copyright TaraKA and The Tara Chronicles, 2021. Unauthorized use and/or duplication of this material without express and written permission from this site's author is strictly prohibited. Excerpts and links may be used, provided that full and clear credit is given to The Tara Chronicles with appropriate and specific direction to the original content. The site identity digital drawing is copyright TMA, 2018, and is prohibited from duplication without legally obtained consent from the artist. I do not own the copyright to other images posted unless specifically stated.
Loading Comments...
Comment
×
<span>%d</span> bloggers like this: