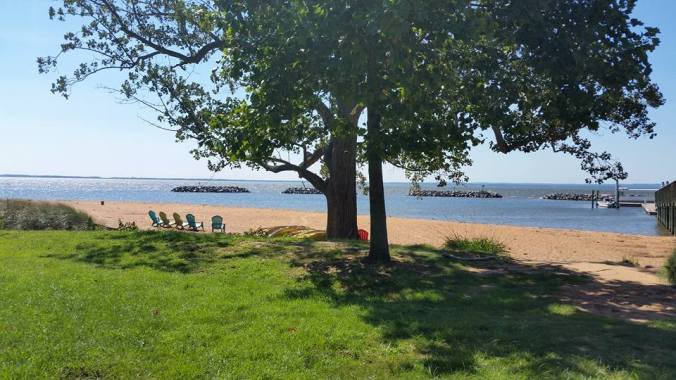 As the mother of a Type 1 child, I’ve been on many field trips either as chaperone or just as “nurse.” I’ve been to an arts institute, a technical high school, the Amish Farm, Fair Hill Nature Center (3 years in a row), the local waste treatment plant, Longwood Gardens, a high school drama club performance, Annapolis, Conowingo Dam, and several outdoor scientific explorations in our local area. We live in a rich landscape of nature and bodies of water here in our corner of Maryland and our school system takes full advantage of outdoor classroom opportunities, often led by an organization called North Bay. It’s one of the things I love about living here. The field trips, however fun, always leave me feeling hungover and flu-like by the time we get home – so I was really not looking forward to being on a 4-day field trip.

When we first moved here three years ago, Opac was in 7th grade and Veruca was in 3rd. Opac came home one day telling me about the 6th graders being gone for a week, to some place called North Bay. What do you mean, they’re gone all week?  “They go there and stay overnight for the whole week,” he said. After a nanosecond of – who in their right mind plans something like this – it occurred to me that one day I’d have to face this with V. I already knew there was no freaking way she was going there. I was prepared for battle over this, prepared to tell someone that they can’t make her go, and there was no freaking way I was going to this place for a week – overnight. I had already made up my mind, three years ago, that she wasn’t going.

And then the day finally came. The 6th grade trip to North Bay Adventure Camp. This year we were going the second week of school – the newly-minted middle-schoolers barely adapted to their new environment – and we would also be the first school to kick off North Bay’s school season. There were packets to fill out, medical forms to complete, and FBI clearance forms to turn in. Answers to questions were sparse, and it felt like we were all going in blind on a wing and a prayer.

Veruca rode the bus to school the first day, and I was scheduled to arrive independently at North Bay at 11 a.m. I checked in and received my wristband for the week. The chaperones were milling about at the main point of entry between the administrative building and the Dining Hall.

The buses pulled up around noon, and the kids disembarked to loud music and cheering counselors all in red t-shirts, and were directed to the end of the boardwalk between the two buildings. They were divided into two sides – boys and girls – and that is how they would stay until they returned home. There was some welcome-to-North-Bay fanfare, followed by instructions and expectations over the next several days, and dismissal to collect their luggage and report to their cabins. Even though V was considered a “day camper,” she was still assigned a cabin to change and rest in between lessons and activities.

We had some down-time there as I met the “overnight mom,” and the girls made up their bunk beds and unpacked. I got to meet the two young ladies I’ve been hearing about – K and M – who also have type 1 diabetes. K and M were overnighters, and this would begin the ongoing conversation with V about why can’t I stay overnight too? that I finally had to shut down after the second day.

Finally… lunch! I proactively packed myself a turkey sandwich just in case. In case of what, I wasn’t sure, but anyway. The kids lined up outside the dining hall – 3 lines each of boys on one side, girls on the other. The tables inside were tables of 8, and there were “overflow” tables for the one or two extra campers from individual cabins that didn’t fit at the original 8. This would be something that the kids determined at each mealtime – who would go to the overflow table, and the only rule established was that it was on a rotation-basis.

The grownups had their own tables, and on that first entry into the dining hall – it felt like being back in school again, being the new kid, trying to find a friendly table to sit at. I internally chastised myself for feeling like this. I’m 47 years old! Who cares anymore? It’s funny how quickly we can recall adolescence. Those situations are burned into one’s memory for all eternity.

I found a table. Meals are served “family style,” meaning that we each have a plate with some food on it, and then there are platters and bowls of other offerings we serve ourselves from. There’s a table runner, or whatever they’re called, from each table who has to go get refills if needed and more pitchers of water. I don’t know how I managed to avoid being one of those, for the whole week.

The counselor who welcomed us on arrival stood on stage with a microphone, dispensing more information that met my ears in a way that made me immediately think of the Peanuts teacher. I asked another chaperone if I was missing anything important and she said all she heard was, wanh wanh wanh wanh wanh wanh.

So, lunch. There was something wrapped in foil on the plates, alongside a banana. The foil revealed a … turkey sandwich! It was on a wheat bun with a slice of orange cheese that was not cheddar, and appeared innocuous enough so I ate it. We were also served a bowl of salad tossed with ranch, and I quickly learned that salad was going to be the mealtime saving grace. For dessert, a large plate filled with chocolate chip cookies. Now, I’ve been avoiding junk food in favor of a more healthy gut and not gaining any more weight, but I ate a cookie. And then I ate another. And then there were two left that nobody wanted, so overnight mom and I each took one.

Then, M and Veruca came over to me with K, who told me her sugar was “xx” and going down (she wears a CGM) and asked me what she should do. [!!!!!!!] Who died and made me T1 momma of North Bay?! So I asked her, what do you usually do? I do this. Great! Let’s do that and see how it goes, okay? (** I would never, ever, assume I know what to do for another type 1 child. I don’t even know this young lady’s mother.)

Because North Bay is all about science and environmental education, of course they compost and recycle, and there’s a method to this madness. Paper on one plate/bowl, uneaten food that cannot be composted on another, compost on yet another. Empty any unfinished liquids back into the pitchers, stack the dirty plates, pile flatware on top, stack the cups. It suddenly seemed so complicated and I was relieved that someone else at the table took the initiative.

After lunch, the various cabins dispersed to their respective lessons/activities with their counselors, and the chaperones and teachers were shuffled to Turkey Point theater where we got the schedules for each of the cabins, the expectations they have of the students, what they hope to accomplish this week, and how he/they handle misbehavior. After the kids’ lessons there followed an activity time, and our girls were scheduled for the giant swing. They get all harnessed up and jump on this 3-seater, get hauled up super high, one of them releases the clip, and off they go, screaming like lunatics. V, K, and M all went together. In fact, they went most everywhere together, and so I nicknamed them Team Type 1 on the first day. They liked it.

We were supposed to go kayaking afterward but the winds were high and the water was choppy, so the activity was cancelled. The girls were so disappointed, and we never did get rescheduled to do it. So we killed time until dinner at Horseshoe Point, which houses an indoor climbing wall, a game (billiards) room, gift shop, and the Frog Spit café. Which serves various flavors of Hershey’s ice cream – though not one kid I saw was eating anything other than the cotton candy ice cream. Bleck. Veruca harangued me into letting her buy a North Bay water bottle for $7.50 that was also used for free soda fountain refills throughout their stay. She left it at home the rest of the week. Most. Expensive. Soda. EVER.

**Disclaimer: I don’t use the upgraded service; therefore, you will see ads at the bottom of my posts (ads I don’t see because I’m not you). As it has come to my attention that certain ads may not align with my world views – I am compelled to add the following statement until further notice.

I ABSOLUTELY DO NOT SUPPORT DONALD TRUMP. NOT YESTERDAY, NOT TODAY, NOT – EVER.

All written content, unless otherwise indicated, is Copyright TaraKA and The Tara Chronicles, 2021. Unauthorized use and/or duplication of this material without express and written permission from this site's author is strictly prohibited. Excerpts and links may be used, provided that full and clear credit is given to The Tara Chronicles with appropriate and specific direction to the original content. The site identity digital drawing is copyright TMA, 2018, and is prohibited from duplication without legally obtained consent from the artist. I do not own the copyright to other images posted unless specifically stated.
Loading Comments...
%d bloggers like this: