So we get off the plane and head toward the exit where Visitor Information gives us a thousand instructions on taking BART into the city. Todd is the only one paying attention. She lost me after the third step of the directions. We opt for a cab, which they said would cost about $65. After six hours on a plane and no sleep, it was a no-brainer.

We crossed the Oakland-San Francisco Bay Bridge, where I caught my first IRL sighting of the Golden Gate Bridge. Outside my window, people walking everywhere, pushing strollers, wearing St. Patrick’s Day attire, and I saw a woman digging through a trash can. I watched the cab’s meter ticking. We racked up $60 faster than a slot machine swallowing money, and by this time Todd was getting antsy. Because today was the St. Patrick’s Day parade and every other street was closed to traffic. He made the call to exit the cab at $85 and walk the rest of the way to the hotel.

The Hotel Bijou, billed as a boutique hotel, is themed after the cinema, and located on the corner of Mason and Eddy Streets. There was a homeless man sitting cross-legged against the hotel wall, the sole of one shoe all but gone, smoking what appeared to be a very fat spliff. I ambivalently followed Todd into the hotel lobby which, at half the size of our kitchen, disproportionately resembled the online pictures.

The 65-room hotel was built in 1911. The lobby walls were eggplant colored and two canary-yellow chairs faced the double doors. The counter resembled a retro movie theater counter, part of which had a glass display case with the standard movie snacks. There was an apprehension behind me that was palpable, before Jonathan seemed to hear my thoughts and said aloud, this should be fine. Todd, ever chatty, told the clerk he liked the theme of the hotel. She informed him that they were renovating and soon the cinema theme would be gone, which explained the discrepancy of the pictures and the large black curtain ominously covering one wall of the lobby. She explained that beyond the curtain was a space large enough to cater to 150 people, and that the renovations were intended to open up that space as a restaurant/event space.

One of the maids appeared with a steam machine, with which she began to clean the art deco carpet not more than 8 feet away while we were still checking in. I glanced at Todd, waiting for a reaction. I looked over my shoulder at her for a millisecond, and watched the clerk for a reaction. None from anyone.

After we were all checked in, she instructed us to make sure we pushed the elevator button hard. I’ve never been afraid of elevators, having attended NYU where nearly every class I had involved riding an elevator. I pushed the 4th floor button hard and….. nothing. I pushed it again. And again. This elevator made me nervous. Jonathan stood silently still. He’s a man of few, but calculated words. Todd reached over and pressed it and suddenly the doors closed and we rumbled upward. All I could think was, I didn’t fly OPEN SEATING for SIX hours on a plane with a screaming child to San Francisco just to die in an elevator.

Each room door has a plaque emblazoned with a movie title. Ours was After the Thin Man, a movie I’ve never even heard of, and J got 48 hours. The bare-bones room contained art deco-ish furniture well past its prime, a forest-green carpet, and yellow walls. I threw myself back on the bed and stared at the ceiling, while Todd pulled out his laptop and connected to the wifi. I snapped a couple of selfies never to be posted on social media. No matter what I do, I can never find a good angle that doesn’t look like Quasimodo.

After freshening up, we ventured out in search of food…by this time it was about 3 p.m. which to our sensibilities was really 6 p.m. and, after eating only breakfast, was a long overdue dinner-time. The man outside the hotel was gone, but there were several others in the vicinity talking to themselves or shouting at each other. Where were we?

We stumbled on John’s Grill, a lovely, albeit small little establishment “since 1908” with dark wood-paneled walls covered with black and white photos of famous people. It was the setting for the Maltese Falcon, and apparently a landmark self-described as having excellent service. 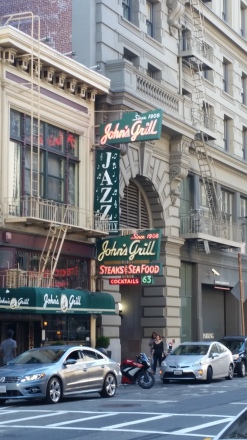 Jonathan had the salmon, which was the best he’s ever had. I opted for comfort food with the Ravioli Primavera in a creamy tomato sauce. Todd ordered a New York Steak sandwich, served open-faced with seasoned fries. One side held the steak, the other side lettuce, tomato, and pickle. Todd apologized and asked the waiter for another half without tomato (he’s allergic). Sure! Said the waiter, and never came back. I don’t know what you consider “excellent service,” but a waiter with no more than four tables who can’t remember who ordered what (including drinks) and forgets to check back at the table, like ever, wouldn’t last a day in my restaurant.

When he finally did return, he pulled a classic pass-the-buck by asking, they never brought that out to you? And then redeemed himself by bringing us flan with fresh berries on the house, which is not only my most favorite dessert ever, but was killer. The boys were kind enough to be stuffed and only ate a few bites, leaving the rest to me. Opac called while we were there, informing me that Veruca and her dad had come home from softball practice with the flu.

As we were finishing up, I overheard a homeless man enter the restaurant begging for just a cup of coffee, and the hostess quietly shooed him outside. Summary review: The food was every bit as good as the exiting patrons promised when we arrived. Definitely check it out.

We walked around afterward in balmy temperatures reaching a breezy 70 degrees, encountering a homeless man in a wheelchair having a lengthy conversation with the air, and eventually made our way to Market Street. We passed the cable car turnaround, with a line of maybe 80 people. Major stores, street performers, and such a cultural diversity it was almost as if we weren’t in Kansas anymore.

An organized but small rally of black Americans was standing near The Gap corner, yelling about the black man and the white man and I-don’t-know-what-else, but it immediately threw me back to my first excursion out as an NYU student when I encountered a similar message delivered slightly less emphatically by men dressed in white robes. Something about it made me feel more uncomfortable this time.

A group of college kids ran by us wearing banana headdresses. There was a 3-piece scrappy-looking band playing really good music, and folks were stopping to listen, video, and dance. The earlier police presence during the parade had all but vanished.

The boys were on a quest for coffee that wasn’t Starbucks, and we ended up at a corner coffee shop about a block from our hotel. We sat in front of the huge glass window. I drank water while they talked shop, listening with half an ear and watching people outside, trying to process the day and not to make eye contact with anyone. Which is hard to do when you’re sitting in a huge window like an animal in the zoo.

The conversation turned to the impending winter storm hitting the east coast that threatened to derail our plans to return Tuesday. I’d faded into the background as one would in a dream sequence, hearing and seeing everything but feeling very much apart from it. And, just as suddenly, my heart was pounding and I was feeling a crushing anxiety. Todd, so attuned to me, turned and asked if I was alright. No, I said.

I knew it was just fatigue, and said so. I’d had just 3 hours of sleep and none on the plane, and everything compounded my sensitivities until I felt like my chest would explode. We walked back to the hotel, crossing the street behind a group of young men being chased by a woman screaming give me back my money! over and over. I turned quickly toward the hotel and missed one of them punching her until she fell over in the street.

Once inside the room I felt the hot tears pushing through the ducts like a birthing baby. Everything just fell to pieces. I pulled myself together and changed into pjs, laid on the bed while Todd skyped with J and Matt back home on the presentation. I posted on FB lamenting on the overwhelming homeless situation here, and promptly passed out – at roughly 6:30 p.m. Pacific.

One thought on “Destination San Francisco: Dazed and Confused”

Join 299 other subscribers
All written content, unless otherwise indicated, is Copyright TaraKA and The Tara Chronicles, 2023. Unauthorized use and/or duplication of this material without express and written permission from this site's author is strictly prohibited. Excerpts and links may be used, provided that full and clear credit is given to The Tara Chronicles with appropriate and specific direction to the original content. The site identity digital drawing is copyright TMA, 2018, and is prohibited from duplication without legally obtained consent from the artist. I do not own the copyright to other images posted unless specifically stated.
Loading Comments...
%d bloggers like this: