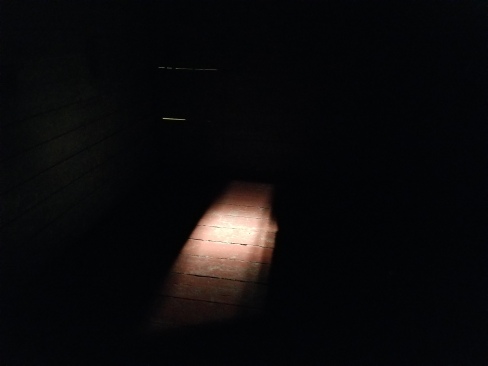 Yesterday was the long-awaited seventh grade field trip to Washington, DC, to visit the United States Holocaust Memorial Museum. Veruca was very excited, at least insofar as one can be excited to spend a day away from the classroom and visit a different city. I would be lying if I said I was looking forward to this trip. And not just because of the solemn nature of the lesson.

We had to arrive at school at 6:30 a.m., and would not be returning for… twelve hours. I was a chaperone and so again responsible for other children not my own. That alone induces anxiety, though I have to admit it’s far better with 12- and 13-year-olds than it is with 8-year-olds. We were going to Washington, DC, a place my apocalyptic mind is certain is North Korea’s prime target. (Nevermind that if this were to truly happen, we don’t live far enough away from DC to survive anyway.)

So we arrive at 6:35 and board one of four buses. I get the last adult seat next to a very nice, but large, man. We introduce ourselves. And then he buckles up his seatbelt (they have these on tour buses!) while remarking he doesn’t want “another Tracy Morgan situation.” Great. What the hell do you say to that?

I texted my mom friend, Ashley, who was on another bus. Our bus didn’t have enough seats, as it soon turned out when three more people tried to board, and one of the two teachers riding with us was outside on the sidewalk losing her shit. And I can hear the bus driver saying all the buses have 58 seats, they’ve always had 58 seats, blah blah blah. All this, before 7 o’clock in the morning. I sipped my coffee and watched them through the window with fascination.

Disaster was eventually diverted when some seats were discovered on the other buses and we were soon on our way. Spazzy loaded the Night at the Museum movie and, later, the second one. After the longest bus ride ever, we finally pulled up next to the United States Memorial Holocaust Museum.

Our ticket time was 11:30 and we had an hour and a half to kill. Ashley announced that she needed Starbucks NOW and so she plugged it into her GPS and we were off. The six of us loaded up on beverages (my girls went with “The Pink Drink” – seriously) and I went with a White Chocolate Mocha Tall. I was so proud of myself for not screwing up how to order at Starbucks.

There are A LOT of black SUVs with tinted windows in DC. It’s creepy, the way they’re parked, engines running, along the streets. Something about them gave me anxiety. Or, maybe it was the caffeine. Either way, I was grateful to get away from them.

It’s a very serious matter, entering museums today – like going through airport security – bags are put through x-ray machines and we walk through metal detectors. V cannot go through – because her insulin pump cannot go through x-ray machines – so at every entrance we have to announce this and she goes around the machine and is personally inspected. Oh, did she love that.

After, we’re handed “Identification Cards” we aren’t supposed to open until sometime later (though no one ever tells us when and we end up cheating, I suppose, because we look). Each card holds the name and photograph of a real person who lived during the Holocaust.

Our group was lined up on a staircase, four across on each step – or, were supposed to be – but it’s kind of hard to squish that many people together especially when many are full-sized adults. One of the chaperones or teachers (not sure who she was) ordered my three girls and me to step down, because every step had to have 4 people on it. I said, there’s no room to step down. (There was a dad directly in front of me who was easily 6 feet tall, twice my size and clearly need TWO steps – picture this scenario). She said, you have to… every step has to be filled. I’m not pressing my body against a stranger, I snapped. (Yeah, I know. Not good form in front of the kids.) For the record, I’m usually very agreeable. I don’t know what got into me.

And before you think I’m a total asshole, I GET IT. I know there was a point to that exercise as we waited for our whole group to get through security. The mom on the opposite end of that step in front of me sniggled. The dad behind me, equally as large, announced a few minutes into our wait that, I hope I don’t get lightheaded and fall down like that last time. And I burst out laughing. I told him at least he’d have a soft landing.

We were soon led to a more open area and three elevators designed to look like something industrial and that’s all I’m going to say about that because I was having the most uneasy feelings here and I couldn’t shake it. (Yeah, yeah, I GET IT.)

Anyway, the museum was very crowded. But quiet. People spoke in whispers. There was at least one other school there and we spent so much time reading the exhibits that I looked around at one point and didn’t recognize anyone. To say that there wasn’t enough time to spend here is the understatement of the year.

We were never taught much about the Holocaust in school. I didn’t read anything related to it until I was in college. I didn’t know who Elie Wiesel was until my Junior year. I don’t think I knew that some 25,000 books that were decidedly “un-German” were burned on this very day in 1933. I didn’t know that books were published and taught to German schoolchildren, intended to indoctrinate them to Nazism and prejudice against Jews. I don’t think I knew that the Nazis also exterminated people who were “incurably ill.” Veruca said, I would’ve been killed.

We left the museum roughly 2 hours later. We were all hungry and also wanted to visit another museum while there was still time. At least one of us wanted to shop.

Raizel Kisielnicki was a 44-year-old mother of three who lived near Warsaw. She and her husband owned a grocery, gas station, and restaurant. On September 25, 1942 she and more than 3000 other Jews in their town of Kaluszyn were deported to an extermination camp, where she died.

Attack on Intellectual Freedom. The 1933 Book Burnings were carried out by German students from universities around Germany. “Any book which acts subversively on our future or strikes at the root of German thought, the German home, and the driving forces of our people” and/or written by authors considered enemies of National Socialism. These included Einstein, Mann, Freud, Kafka, Marx, H.G. Wells, Upton Sinclair, Helen Keller, and Margaret Sanger.

Indoctrination of schoolchildren. The Nazi regime removed Jewish teachers and others who were considered “politically unreliable.” Hitler’s portrait hung in every classroom. New textbooks that taught obedience to state authority, racism, militarism, and antisemitism, and love for Hitler were utilized in classrooms. Der Giftpilz (The Poisonous Mushroom) was an anti-Semitic children’s picture book metaphorically explaining how to recognize a Jew, in the form of “good” mushrooms vs. “bad” mushrooms.

Who. Hitler only singled out Jews, who he saw as an inferior race, for complete annihilation. Germans were among the first to be persecuted for their political activities, for being mentally or physically handicapped, or homosexuals, criminals, or nonconformists. Hundreds of thousands of Roma and Sinti (“Gypsies”) were also killed. The people of Poland, Russia, Ukraine, Bulgaria, Yugoslavia, and Czechoslovakia were also considered inferior races.

How many? The question was, how many did Hitler kill? The answer is ONE. HE killed one person. Himself. Yet he was able to commandeer an army of Nazis to exterminate an estimated SIX MILLION Jews, and others…And an entire population of people was complicit in these killings.

Join 299 other subscribers
All written content, unless otherwise indicated, is Copyright TaraKA and The Tara Chronicles, 2023. Unauthorized use and/or duplication of this material without express and written permission from this site's author is strictly prohibited. Excerpts and links may be used, provided that full and clear credit is given to The Tara Chronicles with appropriate and specific direction to the original content. The site identity digital drawing is copyright TMA, 2018, and is prohibited from duplication without legally obtained consent from the artist. I do not own the copyright to other images posted unless specifically stated.
Loading Comments...
%d bloggers like this: