The journey is not epic, but rather a drama mixed with occasional comedy, and full of ups and downs. I know I sound melodramatic, but I’m frustrated and a bit stabby, and occasionally depressed. I think yesterday my tolerance meter nearly imploded.

It’s summertime. I had major surgery (Todd keeps reminding me), and it’s summertime. The kids are home. Every day. Because – summertime. This amounts to [now] two teenagers occupying the peaceful space of my home 24/7, restless spirits who also spend hours behind closed bedroom doors. If I had a dollar for every time I heard “mom” yesterday, I’d be buying Todd that antique Mustang he’s pining for.

I’m two weeks and 6 days post-op. I’ve tried to do things. Sometimes it was okay, but more often than not it didn’t turn out so good. I was told I could drive two weeks after surgery. On that day, I had to explain to Veruca that this did not mean I should jump in a car and start cruising around. She’s been fairly understanding of my condition, insofar as a self-centered 13-year-old can be, like yesterday we went to the store and she insisted on carrying all the groceries in for me, but she also insisted on an extra stop at the pet store.

Just now she walked out here where I was typing, to ask me what I was planning to do today. Well, let’s see, what I’d like to do: weed the gardens, mop the floors, do laundry, make some banana bread, finish cleaning out my closet, and pull out the 40lb sewing machine and start sewing. What I told her: resting. She sighed the heavy sigh perfected by teenagers the world over and, with a head roll that likely matched the one in her eyes, went back to her room.

She’s bored. I GET IT. I promise you, nobody is more bored than me. But, I learned my lesson. I vacuumed three rooms – the living room, dining room, and kitchen – last Friday, and spent the rest of the day in pain. And then Todd yelled at me, because, YOU HAD MAJOR SURGERY. You can’t strain yourself. You’re supposed to be resting. And when I look at him, he asks me to stop giving him dirty looks.

I hurt. Every. Time. I. Do. Something. This is bullshit. Everyone keeps saying, take it easy! Don’t rush it! Healing needs to happen first! Don’t do anything to encourage the Steri-strips to fall off! Which, by the way, were by last Saturday literally hanging by a sixteenth of an inch from the skin on my neck and the rest of it was flapping in the wind.

No way in HELL was I going out in public with that. So I took a shower and blow-dried my neck as I have done every day because the instructions said to thoroughly dry the site, and the Steri-strips were flapping like a moth stuck to a light until suddenly…. off!

Have I mentioned that I’m bored to death? I can’t lift anything, I can’t do any of the things I would normally do when I’m home all day. I haven’t been to work in three weeks. Someone posted this meme about “when you go back to work after vacation but can’t remember what you even do.” This made me laugh, because I’m worried it’s true.

So far I’ve watched Netflix, some Netflix, and more Netflix, and finished two books. I’m way too invested in what happens to the folks on Fuller House. I’ve read online articles about Johnny Depp’s downward spiral, followed the breathtaking rescue of the boys trapped in the cave in Thailand, and trolled Facebook which itself has become either boring as hell or annoying me with everyone’s vacations. Sure, I’ve “liked” their posts, even when all I wanted to do was say “you suck!” I’ve tried napping, which only makes me feel like I’ve been drugged.

Meanwhile, Veruca decided to clean the bathroom she shares with O. Except the floor was covered with towels (seven towels. SEVEN.) and dirty clothes she insisted all belonged to him. So she knocked on his bedroom door and bitched him out about the mess on the floor and told him to get in there and clean it up. I held my breath.

Moments later they’re in the kitchen, and she’s bitching at him about the pubic hairs on the toilet and shavings in the sink, and he’s saying those aren’t his pubic hairs. Which was the wrong thing to say, and then an argument ensued which ended with accusations about one of them needing a lawnmower for their pubic hair.

Aside from sibling problems, V has been to a birthday party and a day away at one of her besties’ houses, and Opac started mandatory driving school. He has to go every day for two weeks. The first day was Monday, and the parent (“driving coach”) had to attend orientation with the student. Driving coach? I never signed on for THAT. Needless to say, I heard myself referred to as “old-school” and learned a thing or two about driving in modern society.

He’s getting a lot more driving practice in, while I snap on my “holy shit!” neck brace and people stare because my kid must drive like a maniac.

Monday evening he came home from football workouts with a friend and called me from the driveway asking for help getting out of the car.

What do you mean, HELP you get out of the car?

My muscles in my legs seized up and I can’t move.

How am I supposed to help you with this? I’m recovering from surgery. At this point I’m walking outside, where he is standing stock-still next to Kyle’s car with the door open, and Kyle looks like the cat that swallowed the canary. Opac literally cannot move. I told him to take a few steps and close the door so that Kyle (the hilarity of the situation tickling the corners of his mouth) can go home.

Opac winces and hobbles toward the concrete steps to the front door, says he’s not gonna make it. I call for Veruca to help him, and she does…mostly by holding his hand as he climbs the steps and I am momentarily struck by the sweetness of it all until the moment is shattered by him yelling about the pain. I tell him to take a hot shower to loosen the muscles, and he’s insisting he needs to ice it. A brief pissing match over who is right ensues, so I walk away and tell him to do what he thinks is best, then.

He decides on a warm bath, since he called Dad and that’s what dad said to do, because dad is God today. So he’s running the bath and tells me that Kyle just texted him complaining of the exact same problem, and that he fell down the stairs. What kind of workouts are these?

A few minutes go by and I get this… 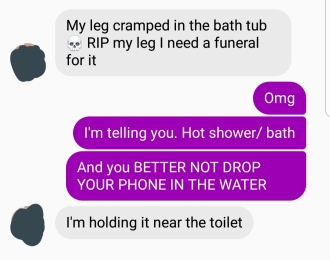 My great grandmother always said, Don’t wish your life away. And that statement has plenty of merit, but lawd I neeeeeed to get to my 6-week post-op appointment. I need August.

All written content, unless otherwise indicated, is Copyright TaraKA and The Tara Chronicles, 2021. Unauthorized use and/or duplication of this material without express and written permission from this site's author is strictly prohibited. Excerpts and links may be used, provided that full and clear credit is given to The Tara Chronicles with appropriate and specific direction to the original content. The site identity digital drawing is copyright TMA, 2018, and is prohibited from duplication without legally obtained consent from the artist. I do not own the copyright to other images posted unless specifically stated.
Loading Comments...
%d bloggers like this: