I stumbled upon an article several months ago, Things About You That No One Actually Gives a Shit About, Ranked. For fun, I spent 45 minutes that I can never get back on this…

Here are my 15 things that no one on social media cares about:

My dream about Veruca face-planting off a third-story balcony and the race to find a cure for her newly-acquired bacterial virus. Horrifying. Woke up in a cold sweat.

My unsolicited dating preference: I’m married. To a man. I’ve always dated men. Which is not to say I never had an appreciation for women. I just never dated one.

Marriage and parenting advice including, but not limited to, the wife who went camping with her husband and stabbed him with a squirrel meme. My unsolicited advice: marry your best friend – the one who makes you laugh and loves all of your flaws, your cat, and also squirrels. Let your children sleep in your bed until they no longer want to. Hold them every time they ask you to. Trust me.

Things I hate that everyone else hates too: Driving on 95, tailgaters and aggressive drivers, being screamed at by a customer, grocery shopping after 4 p.m., parking at the mall in December, recovering from surgery, bratty children, and running out of wine.

(Does no one really not care about my video of the woman expending all of her energy to push a Costco shopping cart up over the embankment next to her car rather than walk it 10 feet to the cart return?)

Sports: Longtime fan of the Eagles and the Phillies (I grew up in southeastern PA, for the love of God). However, I am now a proud Ravens fan and – thanks to my son – a quiet follower of the Steelers. And, sorry, not sorry – cannot give up my allegiance to the Phillies. It just feels like betrayal.

The last time I got shitfaced drunk was over a year ago, where I “forgot” quite a few details of the evening, and gave up drinking for 4 months. Really, if you can’t remember a telephone conversation with your dad, you wake up on the floor in the bathroom, or fall on top of Barbie’s Dream Townhouse, it’s time to have a second look at your priorities. Not that I’ve personally done any of those things. However, if someone posts this on Facebook, I CARE. Because it’s funny as hell.

My opinions about things… I think everyone has the right to love who they want, I don’t agree with abortion but it’s still MY body-MY choice, the Patriots cheat, Christianity isn’t the ONLY religion, Butterscotch Krimpets don’t taste the same anymore, racism isn’t always glaring, climate change is real, Mustangs are the best muscle cars, tattoos are cool, a homemade burger made with filet tails is orgasmic, camping is not fun, Prince was a musical genius, and raccoons are adorable.

It takes me about a half hour to get to work. Although depending on the job, it has taken 50 minutes, and sometimes an hour and a half.

How does this place compare to where I’m from? Same climate, similar environment. This area is still more rural than that place is now. Cost of living, generally the same. Kids love their schools and have made lasting friendships here. My family still lives there. This is where Todd is.

Deleting people from Facebook? Yes, I’ve threatened to do it based on criteria I made crystal clear. And yes, I’ve mentioned doing it – after I’ve done it. The latter takes the drama out of it, while making a point nobody really cares about.

“People [I’ve] dated and/or didn’t date in high school and/or college.” Hmm…. dated Todd in high school (doesn’t everybody know this?). I didn’t date Prince, or Brad Pitt when he wasn’t gross. Dated a few unmentionables, a couple of assholes who know who they are, pined over one or two that got away until I realized they weren’t worth it, and a couple who were genuinely good. None need mentioning. No one cares. Not even them.

“Hypothetical decisions you would have made that are literally impossible to make.” Um, buying a brownstone in New York, quitting my job and traveling the world with personal hair and makeup artists, dating Prince in my 20s, marrying Todd when I was 18. (Ugh, shut up about TODD already.)

I don’t threaten to delete my social media accounts. Had a handful of moments where I was fed up and posted that I was going away for a while. Now, I just ghost.
Nobody cares.

Social media is supposed to be fun. Go ahead – post pictures of your dog, your dinner, your toes in the sand, your selfies with cocktails. Post cryptic  words like “I’ve finally had enough,” or check in at a local hospital with no further explanation. Troll people whose political ideologies are polar opposites. Post memes that make your friends snort and choke on their morning coffee. Knock yourself out…. People are watching, and you’ll get your likes, and your thoughts and prayers, and your commiserating comments. But most of all – you get connection – which is really all any of us really want, right??

And now, in the spirit of nobody-gives-a-shit pictures (which no one cares are Copyright Tara Chronicles 2018) …. semi-current book pile, an abandoned shopping cart, textbook-perfect artificial discs, a freshly groomed poodle, and a bowlful of cherries. 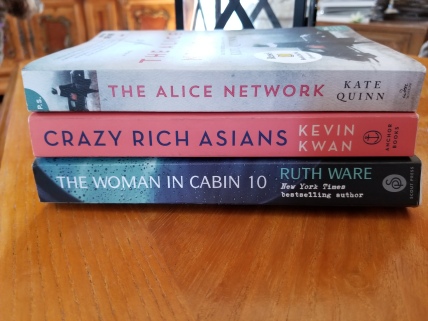 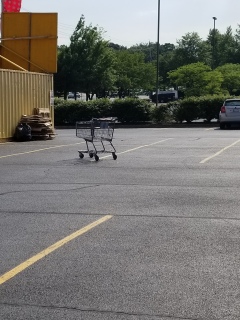 One thought on “Nobody Cares”

All written content, unless otherwise indicated, is Copyright TaraKA and The Tara Chronicles, 2022. Unauthorized use and/or duplication of this material without express and written permission from this site's author is strictly prohibited. Excerpts and links may be used, provided that full and clear credit is given to The Tara Chronicles with appropriate and specific direction to the original content. The site identity digital drawing is copyright TMA, 2018, and is prohibited from duplication without legally obtained consent from the artist. I do not own the copyright to other images posted unless specifically stated.
Loading Comments...
%d bloggers like this: