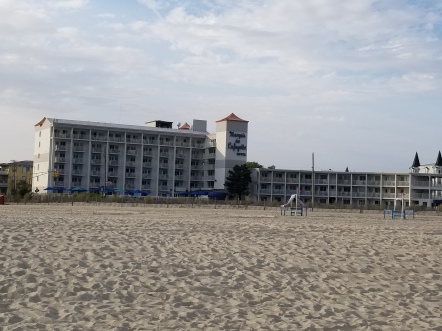 Last week was the annual “Nannie trip” to the beach that, now that Opac has apparently aged out of vacations with granny, has become the annual Girls’ Beach Trip. Sunday afternoon my mom, Veruca, and I set sail for Cape May by way of everyone’s favorite highway – I95. Mom likes to use Siri and her iPhone for directions while I am using my car’s GPS – and then we argue about which one is correct. This usually ends with Siri informing me to “watch your language.”

On a completely not unrelated side note, Siri follows me on Twitter. Well, not Siri, but Susan Bennett aka Siriously Susan. I was siriously excited about this. I mentioned it to mom and she said Siri isn’t a real person, and I’m all like – YES SHE IS. This trend of disagreeing with each other isn’t new, but has definitely picked up in my middle age. Which takes me back to a discrepancy between Siri and my GPS, where my GPS told me to stay in the right lanes, and Siri said stay left. There was a small commotion in the passenger seat, and then suddenly my GPS told me to get off at the next exit, which turned out to be a turnaround-and-back-on the same highway. Mom was only a little bit triumphant.

Anyway, as I’m already 200 words in and haven’t even gotten to our destination yet, let’s jump ahead. We arrived in Cape May shortly after 5 p.m. This year we stayed at the Marquis de Lafayette, “America’s oldest seaside resort…. Since 1885.” The World Famous Congress Hall was built in 1816, and its website calls it “America’s oldest/first seaside resort.” I’m not very good at math, and I don’t want to sound judgy, but somebody is clearly wrong here.

So our room. Outside hallway. Seaside, white wicker décor, soft gray walls, white bedspreads, balcony facing the beach. And then there’s the bathroom. Small pedestal sink with a white framed mirror above, both are Alice-in-Wonderland askew – the sink is tilted downward on the left, the mirror tilted right – and for me, a self-inflicted perfectionist who couldn’t NOT see that every time I sat on the toilet, it made me nuts.

Somewhat less worrisome but not without its own concerns, was the double bed I shared with V – which was lopsided. I had this recurrent fear of V rolling off in the middle of the night. This didn’t happen. However, she is clearly accustomed to sleeping in much roomier conditions (translation: alone), and so there was a lot of bed hogging and one really scary arm fling that narrowly missed my face. I didn’t sleep well. Aside from the usual blood sugar checks during the night, there were the ongoing issues of cramped quarters and the snaggletooth snorer.

First night tradition is dinner at Godmother’s, a lovely little Italian restaurant. It’s BYOB so we picked up a bottle of wine beforehand. This year’s selection: Fleur de Mer Côtes du Provence Rosé. I think I picked this up on our last trip two years ago… it’s excellent. Veruca chose linguini with white clam sauce, mom had the red version, and I went with a seafood risotto with scallops, all-lump crab, Applewood smoked bacon, fresh corn, and heirloom red and yellow tomatoes. KILL-ER. Even V loved it (she’s not a fan of crab).

We stopped by the front desk back at the hotel for a Do Not Disturb sign, which was missing from our room. We promptly hung it on the door. The next morning it was gone.

We ate breakfast at the hotel… a buffet and made-to-order omelets and waffles. I had a spinach and feta omelet that was a bit runny, but I tipped the cook anyway. V had pancakes and an enormous plate of bacon because – all you can eat. I have always imagined that bittersweet moment when one realizes their parents are aging and on this morning I witnessed my mother, in that true senior rite of passage, pocketing creamers like a boss. (Okay so she was really taking them back to the room for our Keurig coffee.)

We spent the rest of the morning/early afternoon by the pool, near the Jacuzzi which, it turned out, was a mecca for the under-10 set, and the water is suspiciously green. No parents, just the children, and three days later I was convinced they just drop the kids in the Jacuzzi and forget about them for a while. But I had to watch these little devils jumping off the side wall into the pool below with little regard for their lives or those below. Okay, I didn’t have to watch, but my peripheral vision is still pretty sharp. One boy, about 4, announced LOUDLY to his sibling – “the bubbles make your wiener feel weird.” Highlight of my day.

The Marquis is quite literally a block away from the Washington Street Mall – a quaint outdoor shopping and dining area in the heart of Victorian Cape May, paved with brick and studded with trees. We shopped here after lunch at the Rusty Nail next the Beach Shack – steamers in a white wine and garlic broth (my favorite thing!), crab cake sandwich-no-bun, and a grilled chicken quesadilla the size of New Jersey. We had ice cream at Kohr Bros later and then none of us was hungry for dinner.

I bought V a cute romper that was actually a large (I have no idea why), and some jewelry for me. I’m on the hunt to replace a thumb ring I lost at the bowling alley on The Last Night of the season (really). Never found one, but I did buy two pairs of earrings and a bracelet. I never do stuff like this for myself. It’s fairly liberating. If you haven’t, try it.

So we went back to the room and decided to settle in for the night. We covered a lot of ground on the first day, literally, and – after only 4 hours of sleep – I was drifting slowly toward the wall. I sat out on the balcony – which turned out to be a very noisy place – to call Todd and catch up.

A few minutes go by, and V came out with a magazine held like a tray, with Ritz crackers topped with slices of cheese. Another minute later, mom came out with a glass of wine. Todd and I kept talking. V came back with a cup of microwave popcorn. Then mom appeared with the bottle of wine to top me off. It was just like being rich. Well, if that’s what rich people do.

Kind of an anticlimactic end to the day, but it was much needed downtime before we took on the next two days.

All written content, unless otherwise indicated, is Copyright TaraKA and The Tara Chronicles, 2019. Unauthorized use and/or duplication of this material without express and written permission from this site's author is strictly prohibited. Excerpts and links may be used, provided that full and clear credit is given to The Tara Chronicles with appropriate and specific direction to the original content. The site identity digital drawing is copyright TMA, 2018, and is prohibited from duplication without legally obtained consent from the artist. I do not own the copyright to other images posted unless specifically stated.
%d bloggers like this: