Happy Easter! Unfortunately, no Easter baskets this year. I did buy some Easter candy at the store last week, but it was – like everything else in the damn store – slim pickins. O came into the kitchen this morning and, after munching on Hershey’s milk chocolate eggs, asked me to hide the bag.

He called V this morning and asked her to recreate a previous Easter prank on their dad – whereby they hid all the toilet paper and made him hunt for it. I imagine he won’t find it any funnier than he did three years ago. O is still trying to locate the lost video.

Then O suggested we hide all of Todd’s Jolly Ranchers in plastic eggs around the house. Those of you who know the empty wrapper plague I live with might find this particularly funny. O and I hid fifteen plastic eggs. Now we wait.

I got an email from the Rock and Roll Hall of Fame with “1995 is calling” in the subject line. Oh HELL NO. I am NOT answering that call.

The state of things here now:

Both of the men in my life have been pacing the house all weekend looking for something, anything, to do. The brakes on Todd’s sneakers are always screeching on the kitchen tile.

I found a cocktail glass from several days ago that had mold in it.

One of my fillings fell out yesterday. This so NOT the time for that to happen.

Opac has discovered that he make the kitchen broom stand up all by itself. Yesterday he stood it up in the hallway, the doorway to my bedroom, and the middle of the living room, and waited to see Sabra’s reaction. This is the level we’ve reached in boredom. I shudder to think of just how much farther we can sink.

I return to the office tomorrow. It’s a strange emotional conflict of not wanting to go versus looking forward to seeing some coworkers and getting out of the house.

Where is April the Giraffe? How fickle people are to be obsessed with watching a pregnant giraffe around the clock and have they even given her a second thought now?!

The underwear I purchased at TJMaxx in February in a size medium is definitely NOT a size medium. One pair even caused chafing when I was on the treadmill. Yeah, I know – TMI. And now ya’ll know what size underwear I wear.

Sabra found cat shit somewhere and, well, she’s not allowed to breathe anywhere near us for the next day or so.

Today I have made chocolate peanut butter eggs, vegetable stir-fry, and hummus. Not in that order.

As of this posting, Todd has still not realized he needs a Jolly Rancher and/or that the bowl is empty. We might have to light a fire under this egg hunt soon.

Paper Supplies: Stable. I actually counted the number of TP rolls we have left today.

Alcohol: 3 (my Magic 8 Ball says a trip to the liquor store is “most likely”)

With no further explanation I offer these random tidbits:

Tomorrow is International Plant Appreciation Day. Hug a plant. Or water it. Or post a picture on social media.

Sound travels four times faster in water than in air. That means there’s zero time to escape a fart in the hot tub.

Oscar Hammerstein II is the only person named Oscar who won one. (1941, for Best Original Song.)

A single 2×2 LEGO brick can withstand up to 950 pounds of pressure, and hurts a thousand times more than walking through fire when you step on it. Apparently it hurts less if you step on several at a time, as the pain is then evenly distributed over the foot. I’m going to go out on a limb here and say more people step on a single LEGO than on multiple ones. 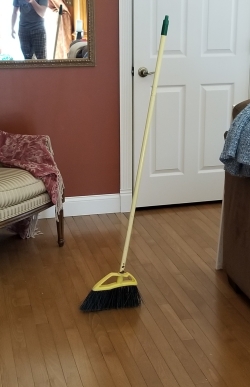 One thought on “Q-Day 32: Easter Sunday”

All written content, unless otherwise indicated, is Copyright TaraKA and The Tara Chronicles, 2020. Unauthorized use and/or duplication of this material without express and written permission from this site's author is strictly prohibited. Excerpts and links may be used, provided that full and clear credit is given to The Tara Chronicles with appropriate and specific direction to the original content. The site identity digital drawing is copyright TMA, 2018, and is prohibited from duplication without legally obtained consent from the artist. I do not own the copyright to other images posted unless specifically stated.
%d bloggers like this: